Tim Laurio (son of AO Advisory member Leslie Noelani) visited Florence, Italy during the Fall 2011 semester he spent at Oxford. He made a point to see the fresco in the Spanish Chapel that Charlotte Mason wrote about, and he brought back lots of pictures. You can click the thumbnails to see larger images. 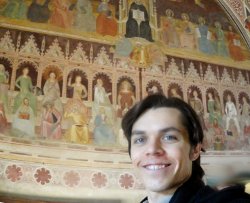 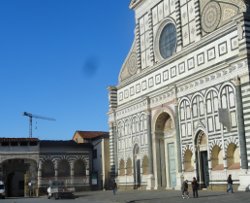 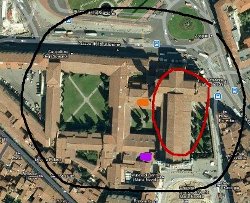 L: Tim in front of the fresco, and the front of the Basilica.
Middle: Front of the Basilica from the street.
R: Looking at a google map, the black circle is the Santa Maria Novella complex (I'm not sure how much is included in the complex; it might include the entire triangular area; Wikipedia has an entry about it here). The red circle shows the cross-shaped structure which is the Santa Maria Novella Basilica. The orange dot shows where the Spanish Chapel is. The purplish dot shows the area where you have to enter to go through the grassy courtyard to get to the Spanish Chapel. The complex has about six chapels. 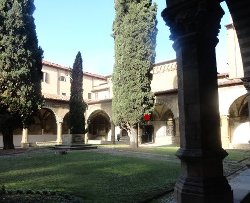 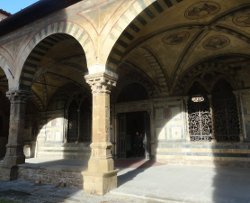 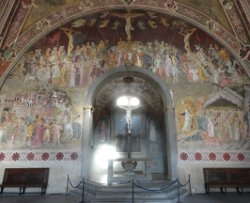 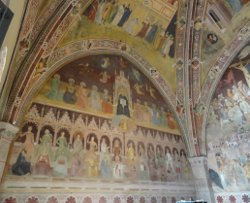 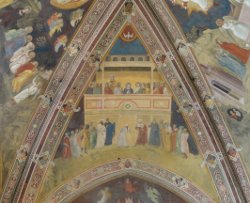 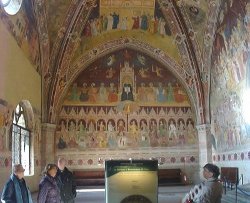 L: Fresco from the side
Middle: Arch at the top
R: Full wall

Note: Clicking the large image below will pull up a huge (over 5MB) image. 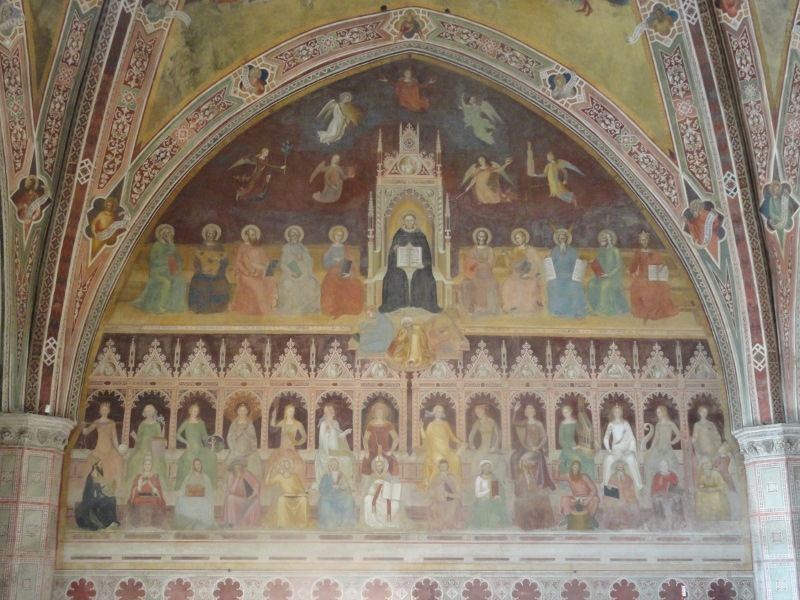 The central figure is St. Thomas Aquinas holding The Book of Wisdom with the words, "Optavi, et datus est mihi sensus: et invocavi, et venit in me Spriritus sapientiae, et preposui illam regnis et sedibus." (And so I prayed, and understanding was given me; I entreated, and the spirit of Wisdom came to me. I esteemed her more than scepters and thrones; compared with her, I held riches as nothing.) (Wisdom 7:7, 8) The figures in the fresco all relate to Aquinas's book Summa Theologia.

Flying over the throne are the Seven Virtues. The four cardinal virtues are below, and the three theological virtues hover highest, over everything else.

Under St. Thomas's feet (illustrating their unworthiness) are Nestor, Arius and Averroes who were considered heretics. (detail)

Under Thomas are The Seven Sacred Sciences (on the left) and the Seven Disciplines of the Liberal Arts, depicting both the Quadrivium and the Trivium.

The Seven Sacred Sciences are on the image's left:

On the right of the image are The Seven Liberal Arts, which include the Quadrivium and the Trivium:

Names of persons in the images are taken from the informational plaque at the Chapel. Some sources and studies give different names. If you'd like to read more in depth about this, there's a 123 page Master's Thesis by Dale Hoover, 1991. Pdf here.

Typically in art -- "Grammar appears with book and rod, Rhetoric with tablet and stilus, Dialectic with a dog's head in her hand, probably in contrast to the wolf of heresy -- cf. the play on words Domini canes, Dominicani -- Arithmetic with a knotted rope, Geometry with a pair of compasses and a rule, Astronomy with bushel and stars, and Music with cithern and organistrum."